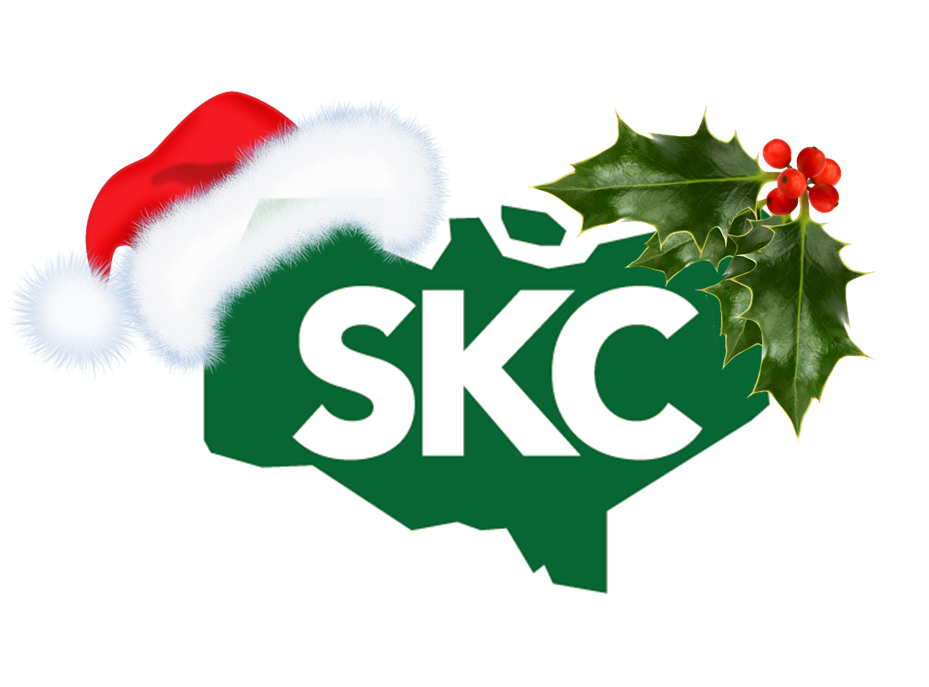 Illness, lockdown, closures, more demand and less capacity, Covid-19 has been a bit of a nightmare for Kent’s voluntary sector. So this festive season, we look back at some of the good things that have happened in this terrible year.

As premises were closed, groups conquered digital to stay connected, but getting online was not possible for everyone. Some groups turned to the telephone to stay in touch and people supported each other with shopping and prescriptions. Mutual Aid community groups sprung up in our neighbourhoods. Local media was supportive, particularly Radio with many Kent charities appearing on KMFM and BBC Radio Kent.

However there’s no escaping the digital transformation that’s happened to the sector during the pandemic. Everything from cookery sessions to fitness activities have moved online this year. 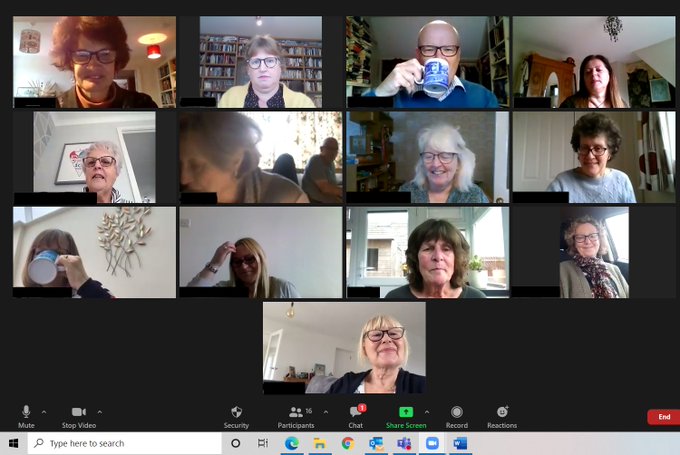 Screenshots of teams became commonplace like this one (above) from Caring All Together on Romney Marsh (CARM) who posted teabags to volunteer befrienders for their Zoom meet up so they could all enjoy a brew together.

Digital was used in other ways too. When Maidstone Museum closed to the public for lockdown, staff dressed up as museum artworks and created digital collages of their efforts to share. 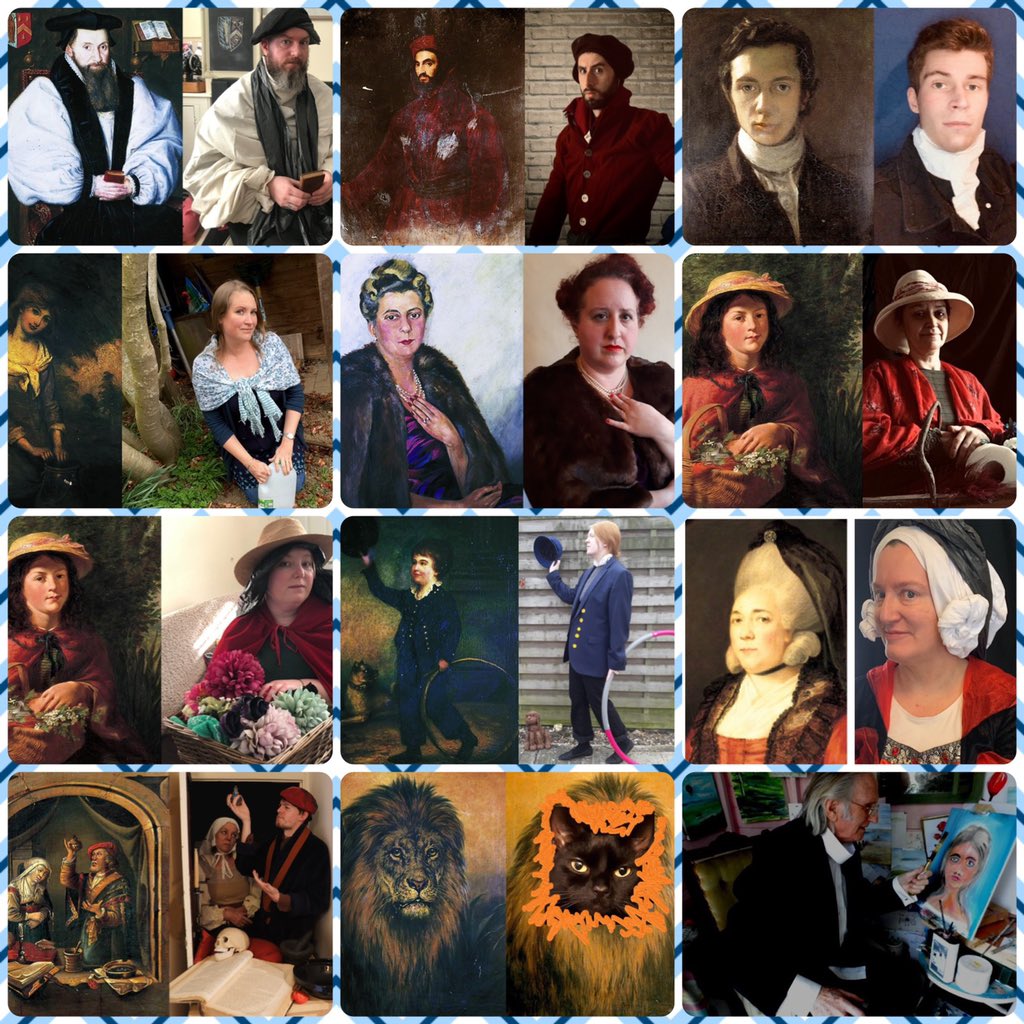 The Battle of Britain Memorial Museum in Capel-le-Ferne scheduled virtual tours and young ambassador Jacob Jennings became a bit of a mascot, helping to raise funds and making this fantastic promotional video with his mum, where he shows us around the museum. If you haven’t been to the museum, it’s definitely worth a watch.

East Kent Mencap has used Facebook Live to great effect with a We’ve Got Talent contest and events such as Stephen’s Autoharp Concert (below). They also shared stories such as Nicola’s Story, where Nicola talks about her art. It’s worth checking out the charity’s YouTube channel. 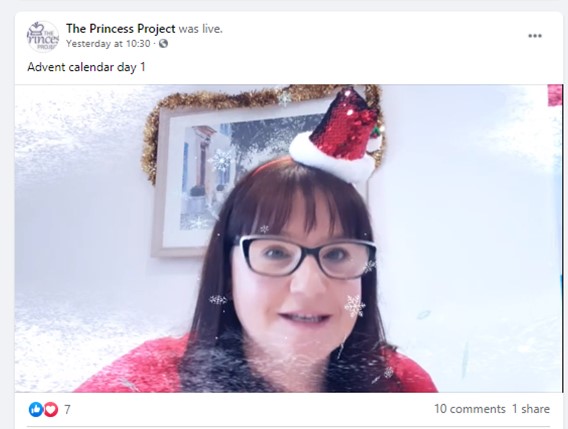 Singing groups such as Alzheimer’s and Dementia Support Services’ Singing Back the Memories started practising on Zoom. Freelance photographer Tash created a short video from the recordings as part of our SKC Specialist Volunteering service.

Digital has also been used to spread awareness. Medway Citizens Advice created a uplifting video to promote what they had been doing to end child food poverty during the pandemic, which had more than 1,000 views. 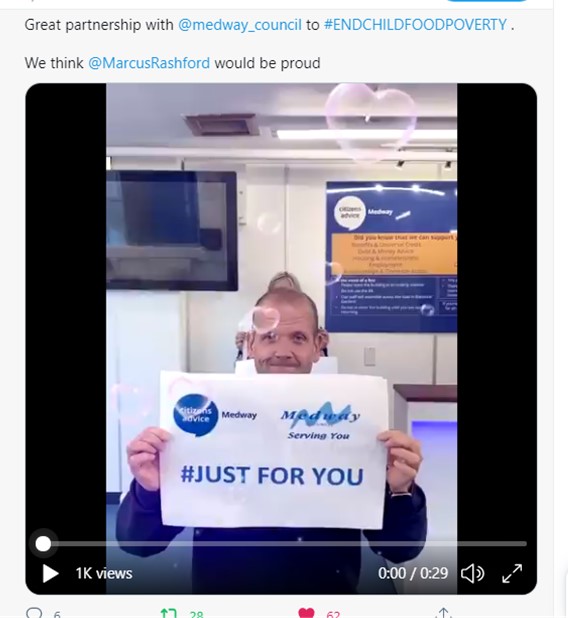 In an effort to plug the funding shortfall from shop and venue closures and cancelled events, many organisations turned to virtual fundraising.

Online auctions were a hit across Kent. Heart of Kent Hospice held a Homemade Christmas Auction in November and raised a staggering £20k in their Art of Kent auction in October, with bids for this Graham Cook portrait of artist Grayson Perry (below) reaching  £1,000. 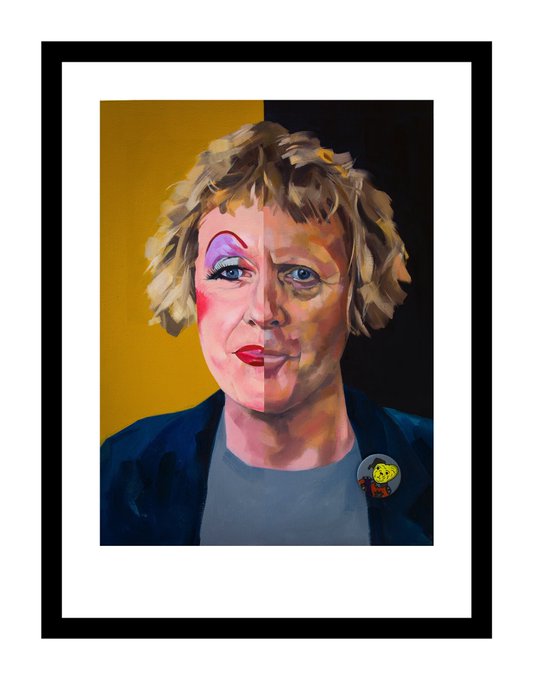 Crowdfunding was also mastered by some. Pie Factory Music met their £5,000 target to provide young people with counselling, after successfully highlighting the mental health crisis exacerbated by lockdown in the press and on social media.

Early on in lockdown, Tunbridge Wells District Council supported three charities in the town with a crowdfunding appeal, raising £11,000. 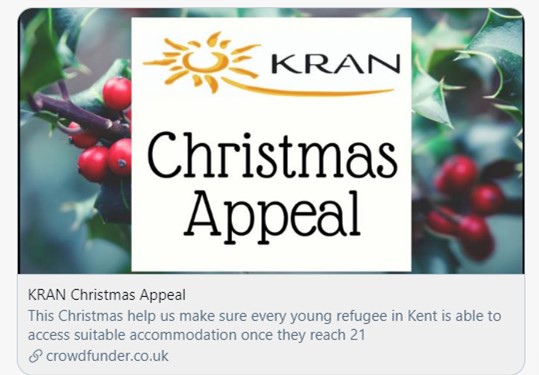 Kent Refugee Action have harnessed digital to great effect during the pandemic and stepped up to advocate loudly for their beneficiaries by becoming the go-to voice for the media on the refugee crisis in the UK. They boosted their social media following from 900 to 10,000. They cleverly use incentives – “just two more followers to reach 1000.” A tweet about their Christmas Appeal encouraged donations with the words: “Only £15 needed to hit £7000 which will take us up to 70% funded with two weeks left to go. We can do this!”

This month, starting on Giving Tuesday, The Big Give enabled charities to double their money in the Big Give Christmas Challenge #TheBigGive2020. Kent organisations like Dandelion Time took part, raising an incredible £32,745.

Christmas fundraising is in full swing across Kent. Another example includes Young Lives Foundation’s Christmas Campaign 2020, which aims to provide every Kent Care Leaver with a gift this Christmas. 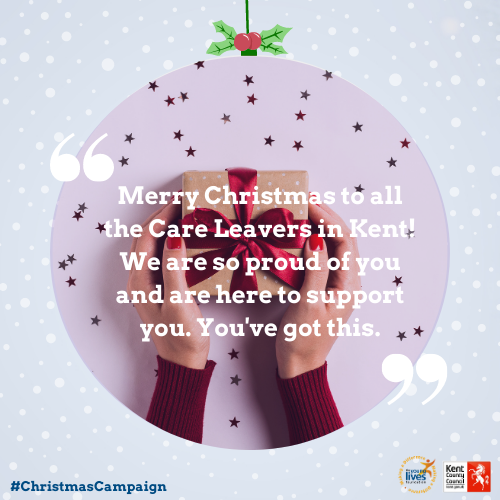 Nourish Foodbank in Tunbridge Wells are using video for their Christmas fundraising campaign to highlight why the service is much more than a foodbank. Watch the video by clicking the image below. 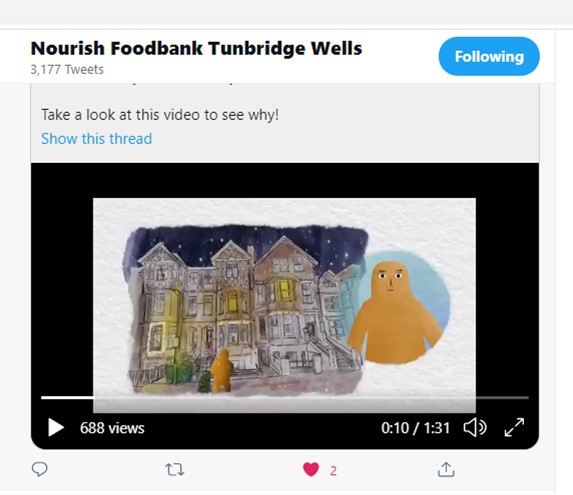 Offline, charities continue to be creative – even turning to recycling Christmas trees to bump up the coffers.

In a bid to encourage people to be more digital Gravesend’s The Gr@nd did a #TechTips video series, which included the video about what’s app below. 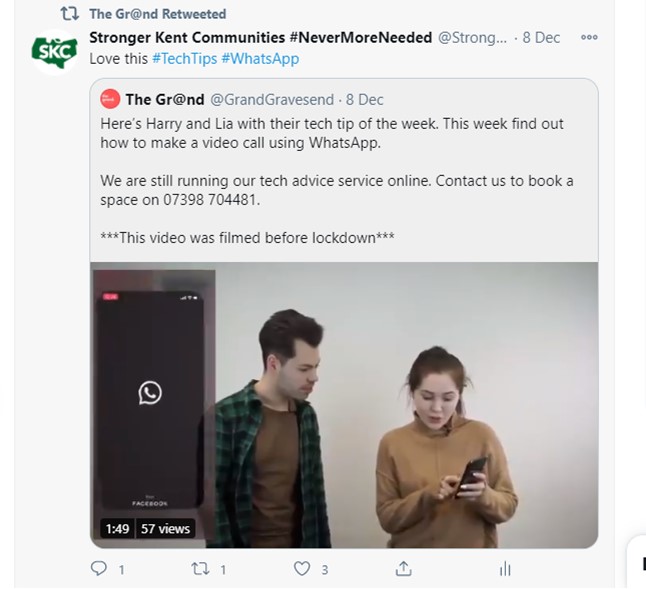 Getting online is not for everyone and concern about digital exclusion have led to organisations such as the Good Things Foundation raising awareness about the issue and connecting people with technology.

In Kent, organisations have received computers from Computers 4 Charity: Imago Community gave their donations to Young Carers and Kent Coast Volunteering to a volunteer administrator working from home.

Groups have turned to the telephone to keep in contact with beneficiaries instead of meeting face to face. And ‘care packages’ have been delivered.

Dover Smart Project was one group that responded as soon as the pandemic was announced, delivering creative activity packs to young carers and older people and encouraging letter writing. Results included this amazing NHS Lego model below. 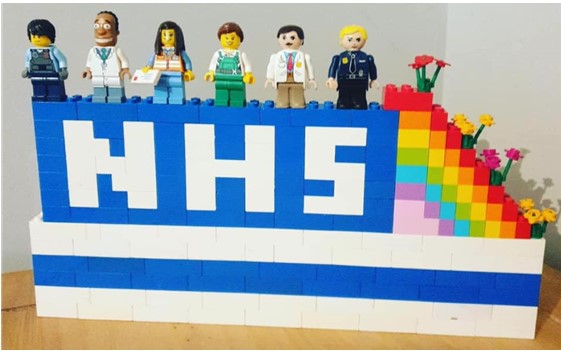 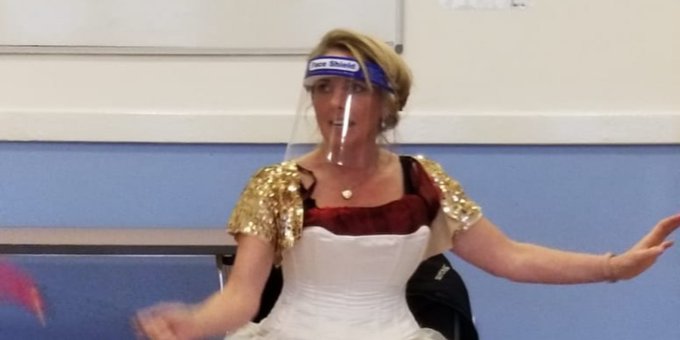 We are all now used to one-way systems, hand sanitiser, visors and masks. We love the picture (above) of Jen from Bright Shadow delivering a session in Thanington with PPE.

Many charities turned to making and selling face masks to raise funds. Check out 13-year-old Katie from Margate (below) who created 200 masks for charities and foodbanks back in April, including her firefighter dad and his mates. 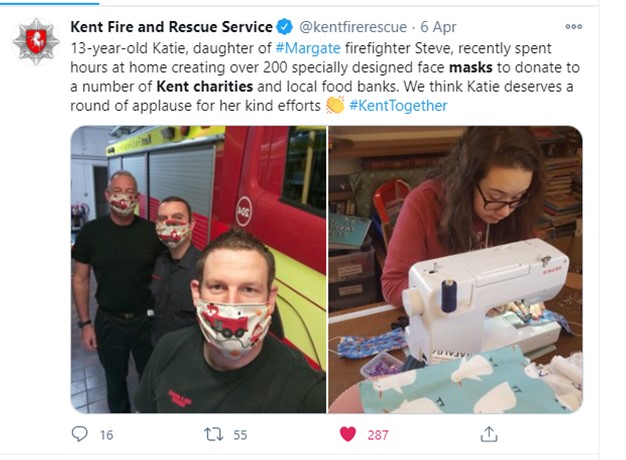 Staff have been furloughed and initiatives such as Furlonteer sprang up to harness the power of skilled volunteers. Grassroots groups sprung up with flyers through doors with numbers to call for help with essentials. Volunteers have kept many services going during the pandemic. There have been volunteer awards – most recently the love where we live awards in Tunbridge Wells, which recognised community heroes such as founder and co-chair of Nourish Foodbank, Olga Johnson, in the individual hero award.

As we stagger towards 2021, to keep people’s spirits up, there are lots of initiatives such as deliveries of  Christmas hampers by The Community Car Service in Tunbridge Wells to their elderly and isolated customers.

And we particularly like this feelgood video summary of Pie Factory Music’s pandemic year.

As we limp towards the end of 2020 😂 we thought we'd share some of the beautiful things that have happened this year, despite the chaos. Young people are amazing and it's been an honour to journey with them this year. pic.twitter.com/nb9bFLz124

To round off this blog, we thought we’d finish with a song. In Gravesend The Gr@nd’s Gifted Young Generation project have just released this Christmas video. Click the picture below to watch. 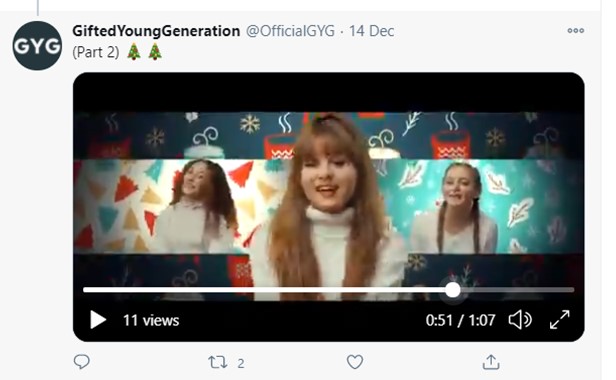 See you in 2021. Best wishes from the Stronger Kent Communities team.